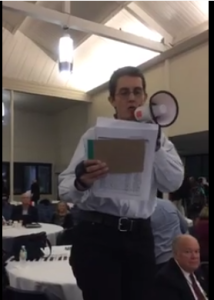 Here is the statement shared by Dr. Dorothee Benz this morning as the Council of Bishops meeting was again disrupted by members of Love Prevails and MIND. To watch the video, click here.

We feel it is impt to report back on the conversation we had last night with Bishop Ough, members of the commission as currently constituted, and a few others whom we invited to join us:

We began and ended by reiterating the demand, the urgent need for the COB to act with grace and admit its grievous mistake in how it has constituted this commission and to re-constitute it to include 50% LGBTQI people, whereby those people must represent the full, diverse spectrum of our communities, specifically, including people of color and women.

We asked for a response to this demand by 8am. We did not even receive the courtesy of a “no.”

That is why we are here, again, now.

The commission you have formed was mandated by the General Conference – and here I am quoting directly from this council’s statement that was adopted by the GC — “to develop a complete examination and possible revision of every paragraph in our Book of Discipline regarding human sexuality.”

Yet you have excluded LGBTQI people from having a meaningful voice on this commission that will examine the raft of discriminatory rules against us. There are two identified LGBTQI people, out of 32, on the commission, both white cisgender men.

For 44 years, this church has legislated about us, issued judicial rulings curtailing our rights, put us on trial, and studied us nearly to death in three prior commissions, always talking about us, never talking to us, with us.

We are told this is not the time or the way to protest.

Every institutional channel of change in the United Methodist Church is closed to us. At General Conference, there’s an airtight majority that refuses to recognize our humanity. Our Judicial Council rules steadfastly to enforce the rules of discrimination. Our trial courts forbid any defense based on the Gospel call of radical hospitality. Our annual conferences are forbidden to pass resolutions barring discrimination, and are overturned if they do.

This commission was the last chance for LGBTQI people to finally sit at the table and negotiate with those in power about our lives.

And now you have refused that as well.

You talk about doing no harm, yet refuse to use the power you have to stop the harm that is done on a daily basis to LGBTQI people by the system of codified discrimination in the UMC.

You talk about the need for unity, as though authentic unity could ever be built on a foundation denying the rights of queer people, sacrificing us for the goal of institutional preservation, and refusing to even name us in discussions about our very lives because somehow saying queer people exist in the UMC is controversial.

Unity without justice is a false god, and we will not have our lives sacrificed on that altar.

You want to know why the United Methodist Church is in crisis? Look in the mirror. 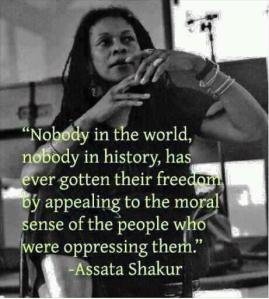 We fundamentally believe
People will be morally persuaded
To agree with us
And act in accordance
(these are two different steps
& even if we persuade people to agree,
this does not equal
their willingness to act in accord)

From what I can tell
this “persuasive” strategy
Has rarely persuaded people
at least
not on slavery;
not on women’s suffrage;
not on war;
not on nuclear arms;
not on the environment;
not on civil rights;
not, so far, on gay rights;
I mean, in 2004
We could not even morally persuade
General Conference
to state that we disagree

Please, persuade me
Give me an example
To persuade me that I am wrong
& I am not talking about individual instances
where someone changed their mind about something
when institutions have changed
under the influence of moral persuasion

Moral persuasion.
Why do we keep trying this tactic?
I believe the reason mostly relates to
Our being
mostly Well-Meaning White People

Examining power means
we are going to have to talk
about what kind of Action,
Not Talk,
Action,
dislodges power
& that’s too scary
Too risky
for most Well-Meaning Christians
Challenges our assumptions
about what works
& What doesn’t work
Like righteousness,
rationality,
strength,
consistency,
kindness,
passion
The conservative right gets this
What do they do to persuade?
Power, money, threats.
For good reason
We don’t want to play that game
But what game are we playing?

One of the reasons
we think these things work
gets at being
primarily
White People (the well-meaning kind)
whose privilege in other arenas
when our whiteness, Christianity, social class
And not queerness
gets to define how these things work
we often do secure the changes or successes we seek
& we think we get these things
Because
We are
righteous,
rational,
strong,
consistent,
kind,
passionate.
When in fact
Our success depends on
The power we have
Because we are
White
Christian
Upper-classed
But we attribute our success to these other attributes
& not to privilege & power

But you say,
“I have seen hearts and minds change.”
And, thank God
So have I
But that is not the same thing.
That is individualism
That I can convince you that I am morally right
Has very little to do
with changing the system to reflect that position
White people don’t get things
that they want
because they are morally right
White people get what they want because they have
power
& privilege
& do what it takes to protect & keep it

Persuasion &
Power
As a movement
We gotta think about these things some more.

Love Prevails recently received a very generous $9,000 donation from two long-time United Methodist LBGTQ justice activists. Listen to the reasons why they gave to Love Prevails so generously. To continue to do our work to Show Up and Disrupt, we are challenging our supporters to collectively match this gift by the end of 2014. We would also gladly accept your donation of frequent flyer miles and hotel points. Please make your financial donation at https://loveprevailsumc.com/donate/ and flyer miles/hotel points through email with loveprevails22@gmail.com.

My husband and I have made the difficult decision to leave Northwest Hills UMC in Austin, TX, and The United Methodist Church in search of a faith community that is inclusive of all people. We have been active members and leaders at NWHills for 25 years, but cannot continue to support the UMC policies of exclusion, oppression, and discrimination against lesbian, gay, bisexual, and transgender people.

The UMC stance that “the practice of homosexuality is incompatible with Christian teaching” flies in the face of medical, scientific, psychological, and other professional disciplines who agree that same-sex attraction is a perfectly normal expression of human sexuality.   Bigotry is all that stands in the way of fully embracing gay and lesbian clergy and weddings, just as bigotry was overcome to denounce slavery and to welcome women into the clergy.

Our children and youth in the UMC are taught to follow the example of Christ and to oppose racial, ethnic, and sectarian prejudice. Simultaneously, the church sends a conflicting message of subtle oppression and outright exclusion. Locally, Mary Ann Kaiser has been deprived of completing the path to ordination at University UMC. Nationally, the continuing condemnation of Bishop Melvin Talbert, Pastor Frank Schaefer and others leaves us disillusioned by our church that claims to have “Open Hearts, Open Minds, Open Doors.”

Consider the LGBT kids, youth and adults worshiping in fear and secrecy within the church, and those outside the church who feel rejected and condemned. Between 30 and 40% of LGBT youth continue to attempt suicide. Ninety percent of LGBT students were harassed in the last year, and 40% of homeless youth are LGBT having been physically or emotionally forced from their own homes.

We do not take this decision lightly. My family’s affiliation with Methodism goes back for generations, including Methodist circuit riding preachers when Texas was the wild frontier. I was raised, baptized, and confirmed in the Methodist Church. My 80 year old mother is an active, dedicated member at NWHills.

I pray that someday very soon the radical, courageous leadership and unconditional love of Jesus Christ will overflow from within the UMC for all people.  I pray that anti-gay language and practices will be eliminated from the Book of Discipline. I pray that children and young people in the UMC will learn from modern-day, courageous role models within the church to strive for social justice and equality.

On that day, I will invite my younger brother and his life partner to come back to the church with the assurance that all of God’s children are welcome, regardless of their sexual orientation.

Mary Lou Taylor is a member of the Love Prevails team. As someone I consider to not only be a role model, but a friend, I take this divestment both as a serious commitment to the cause as well as a beacon by which we as LGBTQ members of the church and allies can follow. I am honored to know Mary Lou and proud to call her a friend – Alison Wisneski, social media coordinator, Love Prevails

After a lifetime as a Methodist and 28 years in the same church, where I served at one time as chair of the Church Council, Missions Committee, Environmental Committee and LGBT Advocacy Ministry, taught Sunday School and Adult Bible Study, organized mission trips and sang in the choir, I left my church this week. It wasn’t easy, but it felt right. I had to divest.

The homophobic, discriminatory language and rules against lesbian, gay, bisexual and transgender United Methodists must change. But power structures only change when it is too painful to stay the way they are. And as long as I stayed and gave my tithes and talents, there was no pain. It didn’t matter how much I did within my own church to make it a welcoming congregation—children who grow up in my church and discover they are not heterosexual still cannot answer God’s call to serve as a pastor; they cannot walk down the aisle of the church of their birth to marry the person they love; and they cannot be united by the pastor who nurtured them throughout their lives. To me, staying felt like belonging to a country club that lets blacks and Jews be members, as long as they don’t use the golf course or the locker rooms. It’s just not right.

Until all Methodists who believe that God welcomes us all, regardless of sexual orientation and gender identity, speak out with their voices, their tithes and their actions, or until enough pastors and congregations and bishops decide to follow Christ’s teachings over the flawed Book of Discipline, nothing will change. So I have withdrawn my presence, gifts and service from the United Methodist Church. I will continue my witness, by working with Kairos Co-Motion and Love Prevails. And I will continue my prayers, praying that the United Methodist Church will stop discrimination in all forms and become truly welcoming. I pray that one day I will be able to come back to the denomination of my birth without being complicit in harming others.