There was a regularly scheduled communion at every lunch break in the plenary hall at General Conference 2004 in Pittsburgh. On the day the votes went badly yet again for lesbian, gay, bisexual, transgender and queer (LGBTQ) people, we decided as a movement to go to that communion service, where we could stand in the presence of the broken and resurrected Body of Christ. We did this as a means of re-asserting our presence in that Body. We did this as a means of resistance against the false institutional proclamation of one cup, one Body, and one baptism, when clearly the actions of the General Conference actively sought to harm and exclude members of that Body. All forms of our resistance and disruption are embodied statements that the unity of the church cannot continue to come at the cost of LGBTQ lives. These same acts of resistance are theological affirmations that the resurrected Jesus lives on in our whole and beloved queer bodies.

There was weeping and there was anger at communion. There was a need for a deep and spiritual release of the violence that had just been done to the queer body of Christ. Because when votes are cast against the very existence of LGBTQ lives, that is what is happens: violence. Christ’s body crucified again. To not act in the face of such violence does further violence. 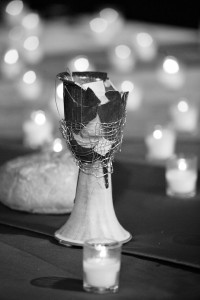 A communion chalice, broken in protest of the United Methodist Church’s stance on homosexuality, is returned to the altar during the 2004 General Conference in Pittsburgh. Photo by Mike DuBose, UMNS

When the sacrament was over, Rev. James Preston grabbed a chalice from the communion altar and smashed it on the floor. The smashing of the chalice was not a planned disruption. While there were many interpretations of that moment of breaking the chalice, in fact there was no chaos, no storming the altar, no desecration of the sacrament. There was a holy anger that took shape in a prophetic act. A movement of the Spirit interceded to express anguished sighs too deep for words. In the breaking of the cup, Christ spoke to the real brokenness of the moment.

The bishop who presided at the communion table was distraught by the destruction of the cup. He got down on the floor and started gathering up the pieces. Others joined him in the gathering.

I had an instinct to take a piece. I had some internal resistance to making the moment feel better than it was. I didn’t want all of the pieces to be gathered up. I pushed toward the front of the group, bent down, picked up a piece off the floor, and put it in my pocket. At the time I had no idea that later they would try to reconstruct the chalice from the broken shards.

have always had that piece of the cup. I rarely speak of it or even look at it. It sits in the same box with other sacred items from across the years. I know exactly where it is in my home. It is in my consciousness. When a recent article came out in the United Methodist News Service surveying the history of LGBTQ protest at General Conferences, I saw a picture of the reconstructed cup and I remembered my piece. I went to the box, took it out and held it for a while. Twelve years later. Things are still so broken and bad in this church for queer people. It is so devastatingly sad and wrong.

The LGBTQ participants in the communion service in 2004 were accused of breaking the church body and fomenting division. This accusation, which will no doubt be leveled at pro-LGBTQ forces at this 2016 General Conference, is completely ludicrous. The Body already was and is broken. The piece of the cup I possess stands as a symbol of this. In the church there simply must be some recognition that parts and pieces of the LGBTQ Body of Christ in the United Methodist Church have been not only broken, but lost. Left. Dead. Gone. Taken. Parts that aren’t coming back to be made part of the whole. Irretrievable by choice or by force.

Despite accusations to the contrary, many of our actions as pro-LGBTQ organizations and as a movement at our General Conferences are Holy Spirit led. This was true of this moment of communion in Pittsburgh in 2004. This will also be true of the disruptive actions of pro-LGBTQ forces at this General Conference. You may not experience it this way, but we ask you to be open to the possibility that this may be true. The LGBTQ body may be broken but the Spirit of Christ is alive in us. All forms of our resistance and disruption are living, embodied statements that the unity of the church cannot continue to come at the cost of LGBTQ lives. Jesus the Christ is working through our movement to speak truths and to resurrect the parts of the broken body that remain.

1 thought on “On the Body Being Broken”