The following blog post is written by Love Prevails member, Alison Wisneski, in response to a recent tweet after the pre-General Conference meeting. The tweet referenced below suggested that the UMC boards and staffs of IRD, Good News Magazine, Reconciling Ministries Network, and Love Prevails take a mission trip together. 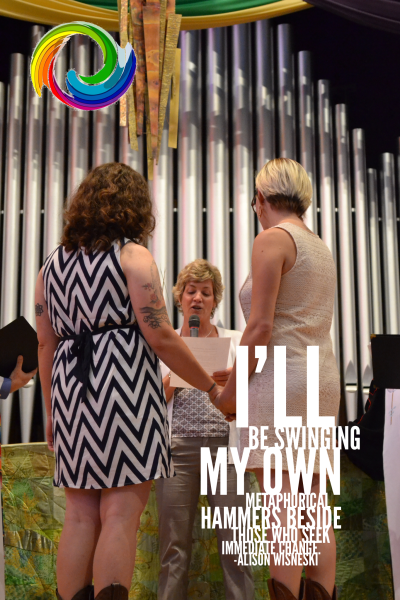 Sometimes I see fellow Tweeters and, through following their hashtags that led me to their page in the first place, find out that we like many of the same things. I get excited and I want to follow them so we can share in things other than agreement that the United Methodist Church’s harm toward LGBTQ+ peoples needs to change or we will watch our church crumble to the ground.

This is not one of those situations.

When I am told by straight white men (which is unfortunately too often) that I need to take a deep breath, pause, and then intentionally put myself in harm’s way for the sake of their and other’s comfortability, I cannot agree with them (even if we both get excited at listening to the same music and love the same Netflix hits). It opens up topic for a conversation that, though I am sick of having, I will have until I am blue in the face. Ask me what I need. Stop telling me.

I am flooded with the words of so many who spoke of oppressors before me. Of Martin Luther King, Jr., who shared in the Letter from Birmingham Jail that direct action is the means to the end of negotiation where an oppressed people are heard. Of bell hooks, who says that domination is successful when an oppressor decides in order to love me, they must make me something else. Of Albert Memmi in The Colonizer and the Colonized, who says that when there is no justification for hatred from an oppressor, the oppressed have no choice but to revolt; to break the condition.

I have been called names by people who work for Good News Magazine and The IRD. I have no interest in spending time on a “mission trip” (which, I apologize, is problematic in its own right – as a justice-seeking space and church, maybe we find new language and ways to travel with our youth that are not focused on going in to help the people we deem need help, no?) with people who do not seek for me to have a life within my beloved church. The hateful words in Good News Magazine, which used to be delivered to my office door for distribution, made me feel like I was choking. Like I was buried under an oppressive Church that did not want me to thrive, it wanted me to suffocate and wither to nothing.

I do not live in a place of safety within the United Methodist Church. Currently, I am bound to a book that says my body is useful for the head count at the door but I had better not stand at that pulpit, the faggot that I am, and preach the words of Wesley and Jesus who may have struggled with my identity but would have no doubt let me have a seat with them at the table because they were a people who spoke of forgiveness – oh, no – my body can be counted but it cannot be recognized for what it is. It is strong, ravished by a bone disease that should have stopped me from walking in my teen years but worked through immense physical pain and suffering to get to a point of safety; it is wise, the first of its family to go to college and graduate school and now teach at the college level, moving its way up from homelessness to home ownership; but by in large it is queer, it so fiercely loves a woman who has coincided in the heart that beats in its chest for so long it feels like it has been in love with her since its formation…this body will not be recognized. Just counted in the pew as it sits silently, waiting for pastors and lay people and fellow good-hearted Christian folks who tell it to wait for the right time, to keep its voice down, to have conversation with those who oppress it.

I will not swing a hammer and share in meals and have silly car-ride singalongs with those who want to stifle who I am for the sake of being a hollow shell to fill the space of a dying church.

I will not do something to make you more comfortable when it comes to my distaste for being called a radical sexual liberationist activist (which was fabulous, by the way, when we chose to co-opt it for our own t-shirts and not allow anyone to claim it but ourselves, a decision we are allowed to make as the holders of the name).

I will not be your hollow body to shove full of your ideas of what is the right thing to do before General Conference.

I will not go inside of your church walls, no matter how reconciled the are, to guest preach about my ideas that mean absolutely nothing in a space that so blatantly disallows me to have power.

I’ll be swinging my own metaphorical hammers beside those who seek immediate change. We seek it with our words, through song, through letters like this, through conversation with those who are actually open to hear my words and not fight with me over Twitter like I’m not a real person. I will hold hands with my fellow queers and those who truly seek to see people like me and those I love have power that we so deserve in the United Methodist Church and not with those who will wash it afterward, hoping to get the gay off.

Let this be a request to all of those who want to include themselves in the LGBTQ-inclusivity conversation within the United Methodist Church, or even involve themselves in communities that are marginalized to which they do not belong: do not make suggestions for me. Ask me what I need next time. And before you respond, listen. Don’t say a word. Hear the words I say, listen to my pleas. Because had you asked me what I needed from groups that so openly hate me for my body and everything inside of it, you would know that I sure as hell don’t need to waste my time with those who seek nothing but death for me and my family.

3 thoughts on “A Request for Your Consideration”